Many Australians will take a trip to one of our national parks over the holidays. In New South Wales alone, there are more than 51 million visits to national parks each year. Few if any of us would expect not to make it out of one alive.

But national parks claim lives around the world every year. In the United States, an average of 160 visitors each year die in a national park. Australia’s numbers are unsurprisingly smaller – there have been 13 deaths in national parks since 2013 – but the common theme is that these fatalities are usually avoidable.

Wherever death and injury are avoidable, it pays to alert people to the dangers. In Australia the main risks – falling off cliffs and waterfalls, deadly snakebites, getting lost – can all be reduced by one crucial piece of advice: stick to the path.

Read more: Good signage in national parks can save lives. Here's how to do it right

It sounds simple enough. But in fact, visitors failing to heed advice about walking trails is a significant problem for national park managers. Venturing off-trail poses significant danger to visitors, and puts unnecessary strain on emergency services and police.

Our 2017 study was the first to gather some hard numbers on the reasons why people tend to disobey the signs. We surveyed 325 visitors at Blue Mountains National Park on their attitudes to off-trail walking.

So, what’s behind our compulsion to get off the beaten track? First, 30% of respondents told us that off-trail walking can result in a shorter or easier walking route, whereas 20% said straying from the path can afford a closer look at nature.

Second, visitors are heavily influenced by other visitors and friends – the “monkey see, monkey do” effect. They are much more likely to leave the track if they see someone else do it first. 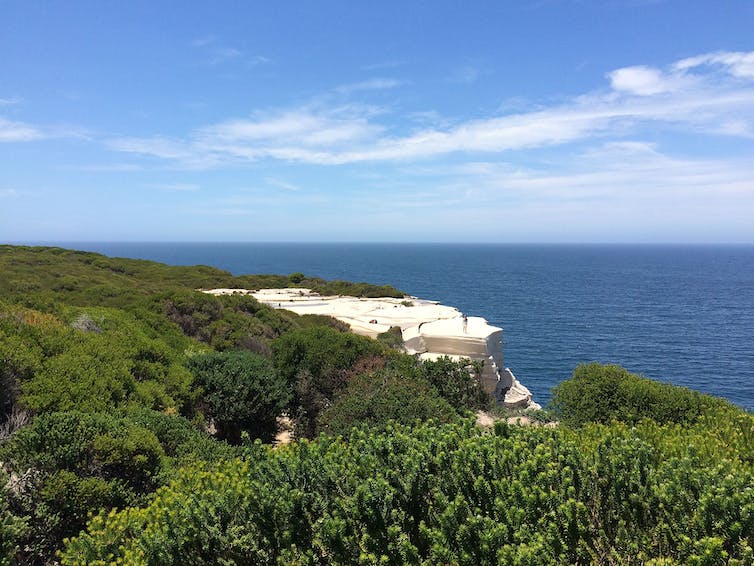 It might make for a great photo, but the dangers are obvious. Wikimedia Commons, CC BY

Third, in the absence of a handy toilet, many visitors venture off-trail for a private “comfort break”.

Finally, visitors rely heavily on signage to help them stay on the designated trail. Some 13% of our survey respondents said they would venture off-trail if there was a lack of adequate signs.

There are several tactics park authorities can use to reduce off-trail walking at national parks. They can use direct management techniques such as capping site capacity to avoid congestion – basically, regulating the maximum number of walkers in a given area, so the paths don’t feel too congested. They may consider zoning orders to permit or limit certain events to control capacity.

Ropes or low barriers along the walking trail can give a clear indication of the trail’s boundary. Of course, there is a fine balance between building structural barriers and maintaining the feeling of natural wilderness in a park.

Social media marketing might also work well. Suggested slogans such as “A true mate sticks to the trail” or “Be safe and stay on the trail with your mates” might help influence visitors’ behaviour. Park visitors are ever more connected to social media – Parks Australia’s social media channels reach an estimated 30 million people.

Signs should also let walkers know exactly what they are getting themselves into, by posting clearly the length and typical duration of walking tracks, and the distance to popular destinations such as lookout points. These signs should be posted both at the beginning of trails at at intervals along it, particularly at junctions or river crossings.

Read more: Our national parks must be more than playgrounds or paddocks

When it comes to our national parks it’s best to assume that, as with most things in life, humans will look for alternatives to what is expected. It’s human nature to want to bend the rules in what we might wrongly think is a harmless way.

Bushwalking in a national park is a great way to spend some time this summer. But when going off-trail could turn a tranquil walk into a deadly accident, it pays to stay on the beaten track.