Great question, Sita! The short answer is ants have something similar to blood, but scientists call it “haemolymph”. It is yellowish or greenish.

In vertebrates (animals with backbones such as humans, cats, dogs, snakes, birds and frogs) blood’s main job is to move important things around the body. It moves stuff like nutrients from our food, wastes, and oxygen from the air to where it needs to go to make your body work properly. Your blood is red because it contains lots of tiny, tiny packages called “red blood cells”, which carry oxygen around your body.

Ants and other insects also have a liquid inside their body that moves nutrients around. Although this fluid does some of the same jobs as blood, it is more correctly called haemolymph.

Read more: Curious Kids: how do ants make their own medicine? 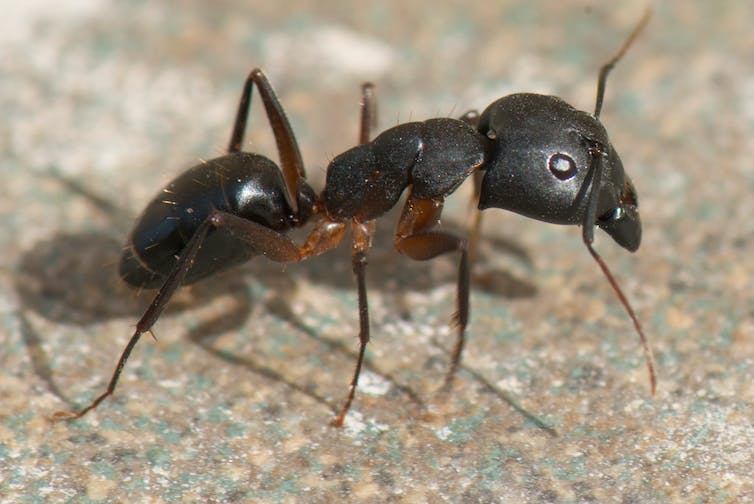 haemolymph is the greenish-yellowish fluid inside an ants body that does a lot of the same jobs that blood does in a human’s body. Flickr/Faris Algosaibi, CC BY

An important difference between blood and haemolymph is that haemolymph does not move oxygen around the insects’ body.

The reason insect blood is usually yellowish or greenish (not red) is that insects do not have red blood cells. Unlike blood, haemolymph does not flow through blood vessels like veins, arteries and capillaries. Instead it fills the insect’s main body cavity and is pushed around by its heart.

You might be wondering how insects move oxygen around their bodies without the help of red blood cells. The answer is that insects get oxygen to their organs in a very different way than humans do.

In humans, oxygen gets in to our bodies through our mouth or nose and then goes to the lungs. The lungs pass oxygen on to red blood cells, which carry oxygen around the body.

Insects, on the other hand, breathe through little holes on the side of their bodies called “spiracles”. Each spiracle leads to air tubes called trachea which branch through the entire body. The air tubes bring oxygen directly to the insect’s organs without needing the help of red blood cells.

Insects breathe through tiny holes in their sides called spiracles. The oxygen is moved around their bodies via special tubes. Shutterstock 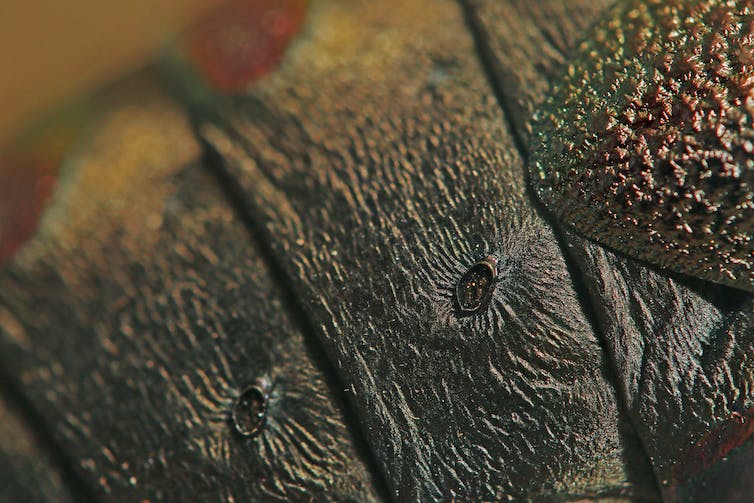 In this photo, you can see the spiracles on the side of a beetle’s body. Shutterstock

The insect’s breathing system doesn’t work very well in larger animals because oxygen cannot travel far enough down the tubes to reach the organs. That’s why insects are usually small.

About 250 million years ago when there was much more oxygen in the air, some insects did grow to amazing sizes. One type of dragonfly, for example, had wings that stretched almost a metre in length. That’s about the distance an average adult covers in a single step!

The Age of Giant Insects, PBS.

Some insects use their haemolymph in unusual ways. When threatened by a predator, blister beetles can squirt haemolymph from their knees! This might seem like a silly way to defend yourself, but it is very effective because the haemolymph contains poisonous chemicals that can hurt or kill predators.

Blood and haemolymph are both amazing liquids that keep different types of animals alive.

Read more: Curious Kids: is it true dogs don't like to travel?