Many people in Australia will head to the beach this summer and that’ll most likely include a dip or a plunge into the sea. But have you ever wondered where those ocean waters come from, and what influence they may have?

Australia is surrounded by ocean currents that have a strong controlling influence on things such as climate, ecosystems, fish migrations, the transport of ocean debris and on water quality.

We did a study, published in April 2018, that helps to give us a better understanding of those ocean currents. 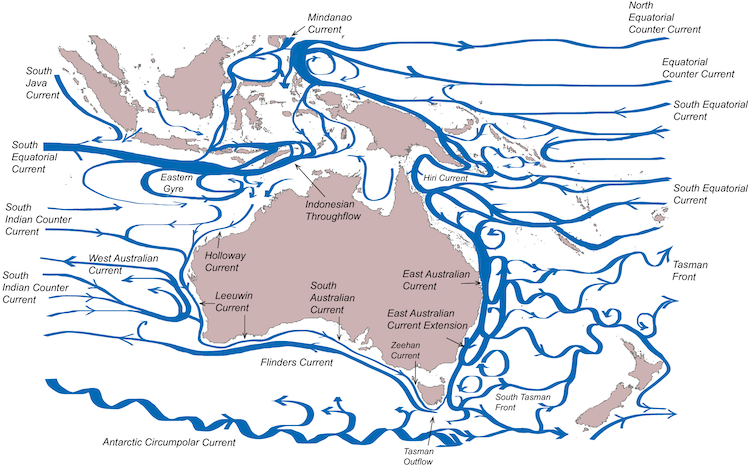 Read more: New map shows that only 13% of the oceans are still truly wild

Go with the flow: Indian Ocean

Our 15 year simulation indicates that water from the Pacific Ocean enters the Indonesian Archipelago through the Mindanao current (north) and Halmahera Sea (south).

It then enters the Indian ocean as the Indonesian Throughflow between many Indonesian Islands, with flow through the Timor Passage being the most dominant.

Most of this water flows west as the South Equatorial Current. Re-circulation of the SEC creates the Eastern Gyre that contributes to the Holloway Current. This in turn feeds the Leeuwin Current – the longest boundary current in the world (Ocean currents that flow adjacent to a coastline are called boundary currents)

The Leeuwin Current turns east at Cape Leeuwin, in Western Australia’s south-west, and continues to Tasmania as the South Australian and Zeehan Currents. 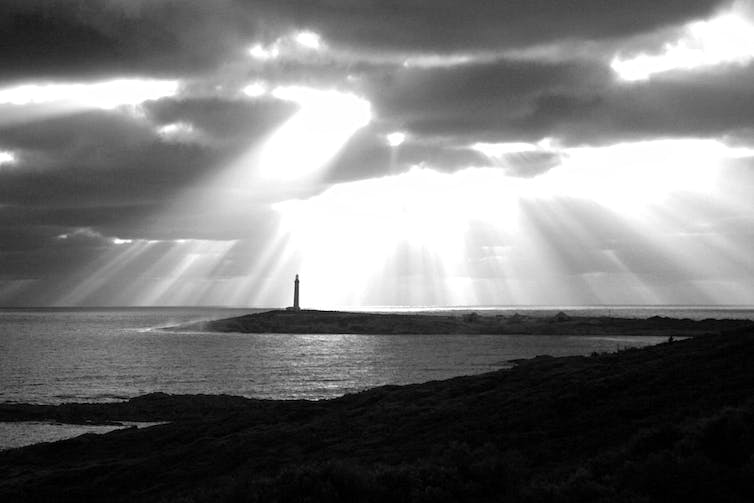 The Leeuwin Current passes the lighthouse at the Cape Leeuwin in WA. Flickr/Cheng, CC BY-NC-ND

There is a strong seasonal variation in the strength of the boundary currents in the Indian Ocean with a progression southwards of the peak transport along the coast.

The Holloway Current peaks in April/May (coinciding with changes in the monsoon winds), the Leeuwin Current reaches a maximum along the west and south coasts in June and August.

Go with the flow: Pacific Ocean

In the Pacific Ocean, the northern branches of the South Equatorial Current are the main inputs initiating the Hiri Current and East Australian Current.

The East Australian Current is the dominant current in the region transporting 33 million cubic metres of water per second southward.

The Tasman outflow is the major conduit of water from the Pacific to Indian Ocean and contributes to the Flinders Current, flowing westward from Tasmania and past Cape Leeuwin into the Indian Ocean.

Impact of the currents

Understanding ocean circulation is a fundamental tenet of physical oceanography and scientists have been charting the pathways of ocean currents since the American hydrographer Matthew Maury, one of the founders of oceanography, who first charted the Gulf Stream in 1855.

One of the first maps of circulation around Australia was by Halliday (1921) who showed the movement of “warm” and “cold” waters around Australia. Although some of the major features (such as the East Australian Current) were correctly identified, a more fine scale description is now available. 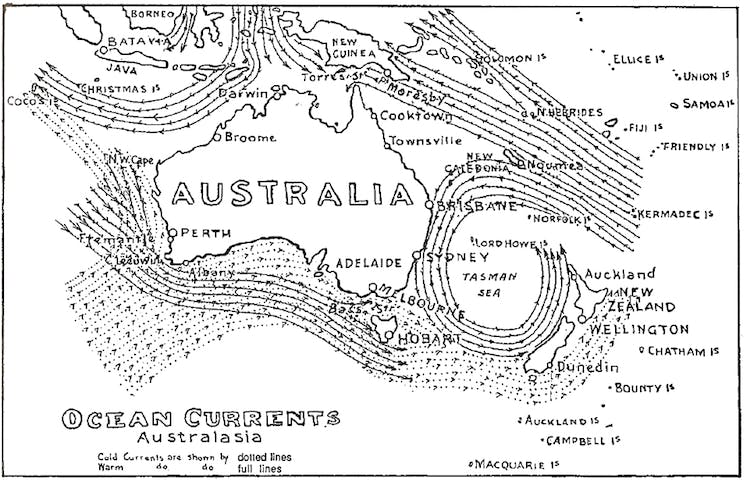 The unique feature of ocean currents around Australia is that along both east and west coasts they transport warmer water southwards and influence the local climate, particularly air temperature and rainfall, as well as species distribution.

For example, the south west of Australia is up to 5C warmer in winter and receives more than double the rainfall compared to regions located on similar latitudes along western coastlines of other continents.

Similarly many tropical species of fish are found in the southwest of Australia that hitch a ride on the ocean currents.

Ocean water from the Pacific Ocean flows through the Indonesian Archipelago, a region subject to high solar heating and rainfall runoff, creating lower density water. This water, augmented by water from the Indian Ocean, flows around the western and southern coasts, converging along the southern coast of Tasmania.

So next time you head for a dip in the coastal waters around Australian, spare a thought for where that water has come from and where it may be going next. 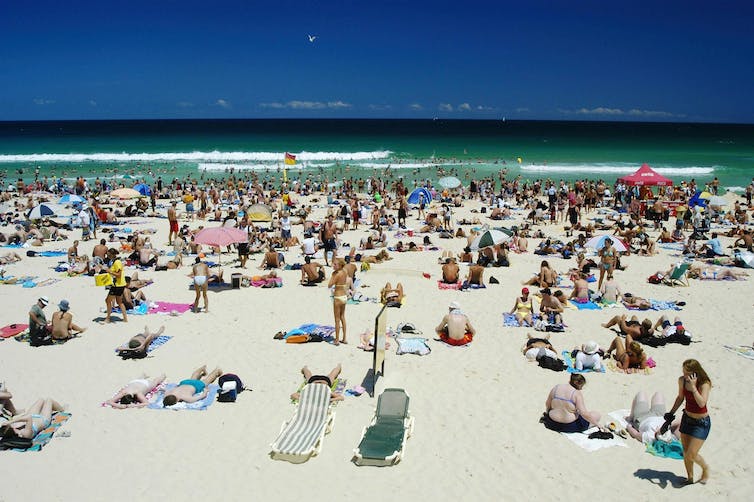 Time for a plunge in the water at Bondi Beach, NSW. Flickr/Roderick Eime, CC BY-ND