The arrest of an Australian-Chinese citizen in China for unspecified reasons is the last thing Australia needs at a sensitive moment in the reset of a relationship that has chilled over the past two years.

But whether it likes it or not, Canberra is being drawn into a broader controversy over China’s detention of foreign nationals on grounds that are opaque and at the mercy of an unpredictable Chinese justice system.

The arrest last weekend of author and diplomat Yang Hengjun raises the question of whether he has become part of a pattern of retaliatory measures by a Chinese government that finds itself under stress from within and without.

At this stage it has not been revealed why Yang, a critic of China’s Communist Party, has been detained. On a previous visit to China in 2011 he was arrested and released without charge. He described that episode as a “misunderstanding”.

What should concern Australian officials is that Yang will find himself lumped with other foreign nationals from countries that may have displeased China and therefore become hostages to a wider diplomatic game.

In the case of the arrest late last year of two Canadian nationals on accusations of “endangering national security”, it is hard to place any other interpretation on their detention than that they are pawns, even hostages, in a broader conflict.

Diplomat Michael Kovrig and businessman Michael Spavor were arrested following the detention in Vancouver of the chief financial officer and daughter of the founder of Huawei, pending her extradition to the United States. 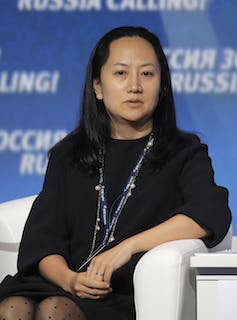 The US Justice Department is bringing charges against Meng Wanzhou for violating sanctions against Iran.

Her case is highly sensitive and enmeshed in a complex US-China relationship scarred by an ongoing trade dispute. In all of this, Canada, in its response to a US extradition request, finds itself the target of Chinese reprisals.

In the case of the unfortunate Canadians ensnared in a diplomatic argument that originated in Washington, a Chinese saying could be applied:

Kill the chicken to frighten the monkey.

In this case, Canada is the “chicken” and the United States is the “monkey”.

Whatever China’s tactics are in all of this, the arrest of the Canadian nationals on national security grounds represents a very serious development. The ripples from it are spreading as more and more countries become alarmed at China’s resort to what could be described as hostage-taking to protect – or advance – its interests.

One lesson might be that if a country, or a company for that matter, finds itself in a dispute with China, then advice to its nationals or employees should be to steer clear of the People’s Republic.

China’s behaviour in this latest stage would hardly seem to correspond with respect for a rules-based international order.

What can be read into these worrying developments is that under pressure, the Chinese regime is adopting a more combative approach to dealing with its foreign policy challenges as its size and reach brings it into conflict with the United States and its allies.

A slowing Chinese economy is adding to pressures on a regime whose tenure depends on maintaining employment and countering unrest.

Above all else, the issue of “stability” preoccupies China’s leaders, who are familiar with the chaos that has swept the country in its long history.

In Beijing this week, President Xi Jinping expressed his concerns about a difficult period ahead for China as it grapples with challenges at home and abroad.

Speaking to officials he warned of a “black swan” event, in which China might be obliged to deal with unexpected developments that threw it off its course. This included what he called a “grey rhinoceros event” - a reference to known risks that are ignored until too late. He said:

In the face of a turbulent international situation, a complex and sensitive environment, and the arduous task of reform… We must be highly vigilant against “black swan” and “grey rhinoceros” incidents.

These sentiments are hardly surprising given the challenges China faces in transforming its economy from an investment-led to a demand-driven model in a slowing economic environment. But they do suggest a higher-than-usual level of anxiety in Beijing in this latest period.

In the years since China began opening up to the world in the late 1970s, it is hard to identify a period that is more challenging for a hard-pressed Chinese leadership. One possible exception is a period in the early 1990s when the country struggled with inflationary pressures and risks of a hard economic landing from a retrenchment in government spending.

The difference between now and then is that China’s economy then was a fraction of the size it is today. Ripples from a Chinese slowdown were hardly felt beyond China’s shores.

Today, the effects of a slowing Chinese economy will have an impact across the globe. This is not least in Australia, one-third of whose exports in goods and services are bound up in a trading relationship.

Australian official cautiousness over the detention of an Australian-Chinese national is explained by a desire not to elevate a dispute with Beijing beyond what is necessary.

If it transpires that an Australian-Chinese citizen has been similarly detained, Payne will have to go beyond simply expressing concern in solidarity with the Canadians.

In defence of their nationals, including a third individual whose sentence of 15 years for drug smuggling was converted to a death penalty, Canadian Prime Minister Justin Trudeau and Foreign Minister Chrystia Freeland have been outspoken.

What should now be clear is that expectations of China becoming a benign power are mistaken. These latest episodes are proving to be a lesson in dealing with a country that is no longer “hiding its capacities” and “biding its time”, as former paramount leader Deng Xiaoping advised.