In Avengers: Endgame, the highly-anticipated 22nd film in the Marvel franchise, Earth’s mightiest heroes contend with the repercussions of supervillain Thanos wiping out half of all life in the universe with the snap of his fingers.

But did he need to? Not exactly. When setting the events of Endgame in motion during Avengers: Infinity War, Thanos said:

It’s a simple calculus. This universe is finite, its resources finite. If life is left unchecked, life will cease to exist. It needs correction.

Thanos turns half of all life into dust. But according to the study of resource management and geography, population reduction does not necessarily solve the problem of resource scarcity.

When Thanos snapped his fingers, he performed what 18th century scholar Thomas Robert Malthus called a “positive check” on the population. Positive checks, like Thanos’s snap, increase the death rate to reduce population to a sustainable level.

Malthus argued that population collapse and environmental degradation occurred when there were too many people and not enough food. This is when positive checks – such as famine, plague, war, and natural disaster – would occur.

However, he argued that, once population size fell, strain on the environment eased, and population would increase to suit the amount of available resources .

Thanos assumed that halving population size would solve resource over-exploitation. But according to Malthus, as resources suddenly become abundant, the population of 3.5 billion people at the start of Endgame would inevitably grow again.

Read more: A country can never be too rich, too beautiful or too full of people

The politics of distribution

Thanos also overlooked the influence of social, political, and economic processes on access to resources – known as the “distributional” argument for explaining resource scarcity.

Average global supply of food exceeds the minimum dietary energy requirement globally, which shows that the world can produce enough food, but that food isn’t reaching everyone who needs it. Uneven access – rather than overpopulation – is the problem.

When explaining his reasoning, Thanos noted that the snap would be “at random, dispassionate, fair to rich and poor alike”.

However, removing half of everyone who is rich and poor doesn’t address the underlying reasons for wealth inequity. The disparities which created inequitable distribution of food and other resources will persist, and the same patterns of resource use and access are likely to continue. 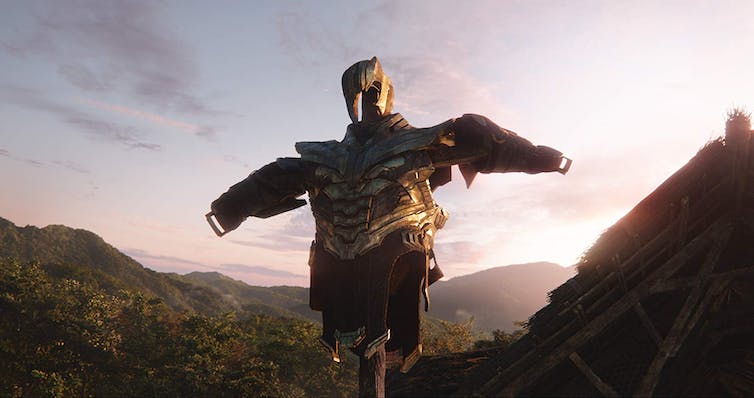 Supervillain Thanos assumed that halving the population of the universe would create a better world. Marvel Studios/IMDB

Read more: How to feed a growing population healthy food without ruining the planet

Similarly, a “political ecology” perspective argues that those with the greatest economic and political power often get to control how the environment is used, and how resources are distributed, typically at the expense of disadvantaged groups.

We see this in the ongoing civil war in Yemen, where fighting has blocked aid shipments, food prices have doubled, and food has been stolen by those with greatest access to resources.

Food insecurity and hunger among marginalised populations can occur even within affluent, industrialised societies.

In Endgame, our heroes find that the underlying challenges which created the conditions for resource overuse persist. There might be whales in New York Bay because there are fewer ships, as Captain America notes, but Hawkeye (the archer and one of the original Avengers) is still fighting systems that generate injustice and exploitation in Tokyo.

Today, there are plenty of scholars working alternative solutions to resource scarcity, imagining a world that is sustainable for everyone.

Instead of halving the population, for example, Thanos could have created a universe built on local food production.

Or, he could have made each planet in the universe a series of circular economies, which minimise waste by maintaining, reusing, recycling, and remanufacturing resources.

All energy could have instantly been produced by low carbon sources within sustainable energy grids and power infrastructure.

Or the universe could have been reshaped to exist within the safe and just space for humanity, in which we would exert enough pressure on the earth for everyone to live free of poverty, while keeping resource use within planetary boundaries to prevent overexploitation of those resources.

Surely this could get us closer to the paradise Thanos envisioned than a terrified planet with half as many people and just as many issues.

Authors: Chelsea Mullens, PhD candidate in the School of Ecosystem and Forest Sciences, University of Melbourne