Have you ever walked into the ocean from a stunning Australian beach and realised the sand was covered with hundreds of ticklish leaves? This submerged canopy is a seagrass meadow, and while you might see them as a nuisance to swim past, they’re a hidden treasure.

Seagrasses are the only group of flowering plants that have adapted to the marine environment. This group comprises nearly 60 species, which typically occupy tropical and temperate regions of the world distributed across 1,646,788 km2.

There is a disproportionately large number of temperate seagrass species in southern Australia, with Zostera species dominating extensive and very diverse meadows.

Eelgrass (Zostera muelleri) is one of the dominant meadow-forming species in Australia. It has the widest distribution of its family (Zosteraceae) in temperate Australian waters, and is vital to our oceans’ health. 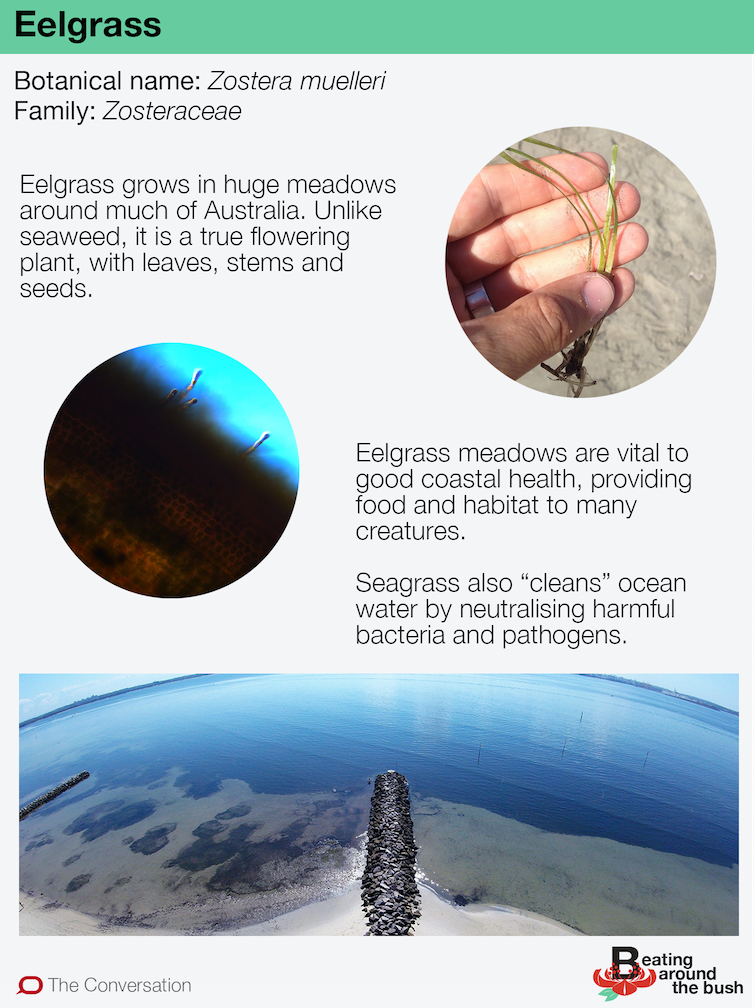 The Conversation Don’t call me weedy! These aquatic plants have evolved myriad adaptations to survive in the seas, and contrary to what many people think, seagrasses are very different from seaweeds. Seaweeds are comparatively simple organisms: they are macroalgae with no vascular tissue, which is what conducts water and nutrients throughout a plant. In comparison, eelgrass has leaves, root and rhizomes, with flowers, fruits and seeds for reproduction. 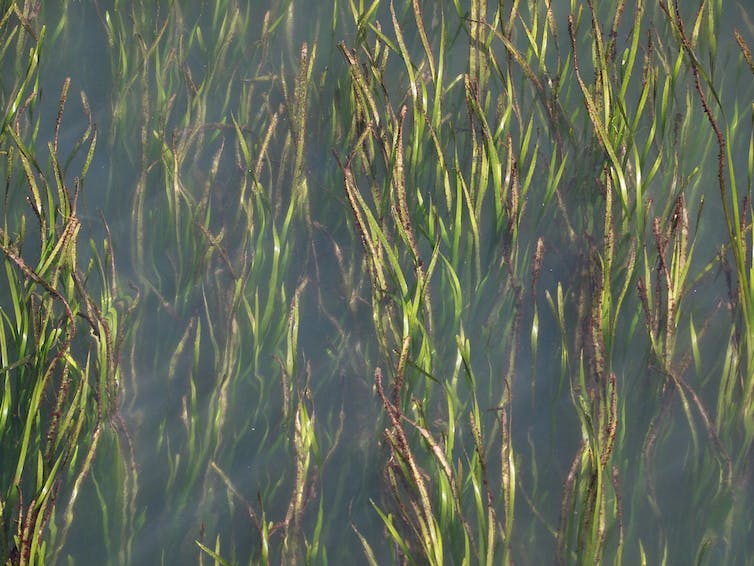 J. Maughn/Flickr, CC BY-SA They do, however, share one thing. Seagrasses and seaweeds are “holobionts” – meaning that they each play host to a range of microorganisms such as bacteria, fungi and microalgae that help to support their health and survival. Research has shown that these crucial host-microbe relationships can be easily disrupted. Climate change is not just affecting the seagrass host; the entire holobiont and even the environment it occupies are suffering from rising temperatures. Purple plants in warm waters My research involves studying the response of seagrass and their associated microbes to environmental degradation. I realised how much warming oceans were affecting eelgrass when I suddenly came across purple shoots in a meadow I was sampling once a month. I was shocked. I had never seen anything like it. While previous research has described the phenomenon of seagrass leaf reddening, I’d never heard of seagrass going purple in this specific black-purple-white pattern. We already knew that the eelgrass accumulates red pigments as a sunscreen against the increased UV radiation that results from ozone depletion and related consequences of climate change. My PhD (soon to be published) has found that this colour change has a strong effect on the microbial communities that live on seagrass leaves. 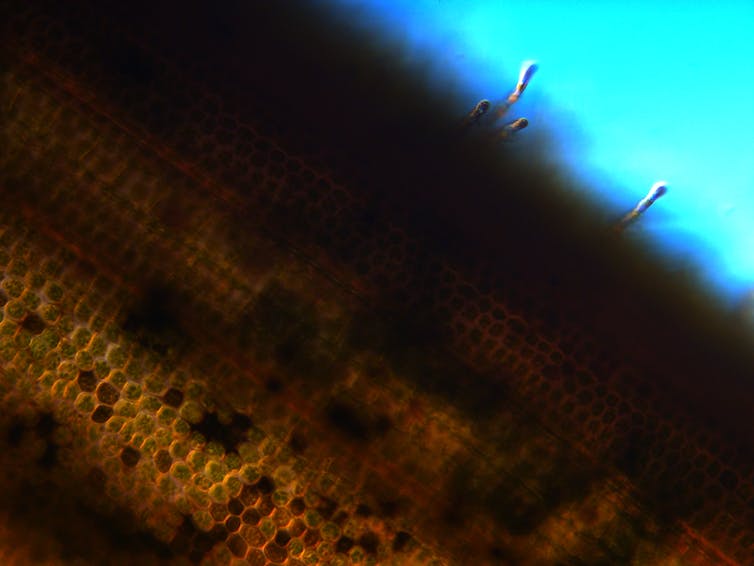 Seagrasses establish and maintain fundamental relationships with the microbes that live among them. Valentina Hurtado McCormick, Author provided Why should we care? Besides producing weird sensations on human feet, eelgrass and its counterparts are a crucial part of our coastal ecosystems. Probably the best example is their nursery role in supporting juvenile fish and crustaceans. They also provide food for a wide range of grazers, from dugongs to the green sea turtle (as featured in the movie Finding Nemo), which feed on bounteous seagrass meadows. Finally, we can also thank them for sequestering huge amounts of organic carbon that would otherwise contribute enormously to the greenhouse effect. Referred to as “blue carbon sinks”, researchers have calculated seagrass meadows could store 19.9 gigatonnes of organic carbon worldwide. I could keep writing about the virtues of Zostera species (and seagrasses in general) for much, much longer, but I will leave you with a single thought: we breathe and eat from a healthy ocean, and the ocean is not healthy without seagrass. Not just grass under your feet Seagrass is so protective, I think of them as one of the most altruistic plants on the planet. They keep waterborne pathogens in check and neutralise harmful bacteria, keeping coral reefs healthy, and acting as an important part of the ocean’s well-being. On the other hand, these aquatic plants also help preserve human heritage. They create a thick sediment layer on the seafloor, beneath which shipwrecks and other treasures are buried and protected from decomposition. Read more: Seagrass, protector of shipwrecks and buried treasure For some 400 million years, eelgrass and other seagrass species have protected the ocean, our planet, and the creatures who live here. In return, we have managed to create uncountable ways to directly or indirectly threaten seagrass-based ecosystems. As a result, meadows have declined globally at the accelerated rate of 7% per year. For many of us, seagrass meadows are simply an obstacle to get past on the way to the waves. But for those of us who spend our days with a snorkel and collection tubes, these little watery plants mean far more. When I look at a single seagrass leaf, I see an entire microcosm of interacting entities.