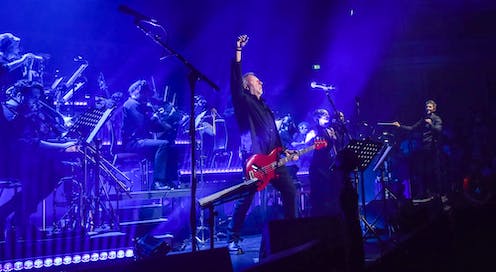 In a previous century, I conducted doctoral fieldwork among the abandoned warehouses, smoky pubs and crumbling squats of the British post-punk, independent rock scene. How strange that I should become re-acquainted with that scene at the shimmering Sydney Opera House.

The occasion was Joy Division Orchestrated, performed not long after the 40th anniversary of the band’s landmark debut album Unknown Pleasures. Joy Division has been described as being “like the centre of a wheel” in continuing “to influence not just music, but graphic design, literature, film and more” four decades after the band died, along with its lead singer, Ian Curtis.

Saturday night’s show was only a remnant of the original group from Salford in Greater Manchester, as founder member Peter Hook substituted his estranged ex-bandmates with guest singers and musicians, not least the Metropolitan Orchestra. Of necessity, the show was radically different from the grungy club experience of its origins. In the hands of orchestrator/conductor Tim Crooks and musical director David Potts, the music was less angular and industrial.

With flesh-and-blood, classically-trained musicians replacing synthesisers, the sound was lush and tonally rich. Guest singer Mica Miller provided a different gender dimension to the songs of an all-male group. She and Hook took Curtis’s vocal role alongside Bastien Marshal, who sounds and looks like him.

Joy Division classics abounded, like the brooding Atmosphere and the disconcerting She’s Lost Control. Inevitably there was Love Will Tear Us Apart which, a decade after its release, came first in the inaugural Triple J Hottest 100, and again the following year. Plus whimsical surprises, like the bizarre, Malcolm McLaren-inspired mashup of that song and Captain and Tennille’s Love Will Keep Us Together.

But the music alone, despite its unquestionable and enhanced majesty, cannot entirely explain the enduring appeal of a band that existed for barely two years before Curtis took his own life.

Joy Division’s flame has been partially kept alive by its successor, New Order, formed in 1980 by the surviving members of the band: Hook, Bernard Sumner and Stephen Morris. New Order broke up a couple of times but is still going, though now without Hook. He and the band have had a long running legal dispute that was reportedly settled in 2017.

New Order’s innovative mix of electropop and dance music has been much more commercially successful than its parent band, which produced only two albums of original music and a handful of EPs and singles. But it could never compete with the power of Joy Division mythology.

In a familiar rock narrative of the beautiful corpse, the premature demise of Ian Curtis and Joy Division offered both pathos and mystery. Neither singer nor band could make embarrassing mistakes or reach some notional use-by date, touring the nostalgia circuit like the Sex Pistols, who inspired them to form in the first place.

Images of Joy Division, usually black-and-white, reveal four intense young men in the kind of authentic, working-class environment immortalised by The Smiths a few years later outside the Salford Lads Club. That famous picture was dominated by Morrissey – who has lived long enough to besmirch his own reputation – just as the glowering Ian Curtis compulsively draws the eye in Joy Division’s still photographs and videos.

When Curtis died, I recall a distraught letter to the New Musical Express, the most influential rock newspaper of the time, claiming that “he died for us”.

Even without such Christ-like imaginings of their late singer, Joy Division’s songs – by turns doomy and angry, edgy and reflective – still resonate in these paranoid times.

Produced under Thatcherism and Reaganism, amid the Cold War, deepening social inequality and the rise of the surveillance state, songs like Disorder, Dead Souls, Atrocity Exhibition, and Isolation exude disquiet and alienation. They could have been written today.

But at a deeper level the aura that formed around the band, and especially its tortured vocalist, evocatively expresses rock’s romantic mythology of dissident youth. It registers in Anton Corbijn’s film about the band, Control, and in the representation of Manchester’s Hacienda scene in which Joy Division is featured, in the film 24 Hour Party People.

Myth-laden yearnings aside, Joy Division’s slim back catalogue still repays repeated listening. Songs like Decades, from the epic album Closer, will resonate with inquisitive listeners yet to be born.

In the end, time and earthly foibles caught up with Joy Division. Punk was supposed to rewrite the rules of the decadent music business, and post-punk to take it beyond the frenetic world of One Chord Wonders into something more existentially enduring.

The known-unknown pleasures of Joy Division Orchestrated are reminders of why the music of this short-lived band remains potent even if the human relationships that made it possible have been torn apart. Again.

Peter Hook presents Joy Division Orchestrated can be seen in Perth on August 9 and Melbourne August 11.