The remains of thousands of Aboriginal Australians are scattered around the world in museums and universities. Many institutions accept these remains should be returned to descendant communities, but it’s not always easy to do.

A major problem is that we often lack detailed information about where in Australia the remains came from. It has been estimated that up to a quarter of the human remains in Australian museums have poor contextual information.

Recently, we completed an Australian Research Council-funded project project that focused on human remains from the Cape York Peninsula of Queensland, in collaboration with several local Aboriginal communities.

What we found suggests no single method such as DNA testing or using geological clues will be enough to reliably determine the origin of remains – an interdisciplinary approach using all available evidence will be required.

Over the past few years there has been considerable interest in the possibility that genetic testing can solve the repatriation problem. One aim of our project was to see if this approach would work in the Australian context.

In a study reported last year, we extracted genetic information from ancient human remains of known provenance and compared them to genomes obtained from living Aboriginal Australians.

We looked at two different kinds of DNA: nuclear DNA (this is the DNA that contains the genetic code for building your body) and mitochondrial DNA (the DNA of the tiny cell units called mitochondria that help to power your body’s cells).

When we used nuclear DNA, we were able to link ancient remains and living individuals from the same area with a high degree of accuracy. But when we only employed mitochondrial DNA from the ancient remains, the accuracy dropped markedly. The nuclear DNA analyses had a success rate of 100%, whereas the mitochondrial DNA analyses failed to identify a region of origin for 31% of the individuals and suggested the wrong region for 7% of them.

There are other problems with relying solely on DNA for repatriation. The complexities of human social life (such as inter-tribal marriage) and the impacts of colonisation on Aboriginal Australians (such as displacement) mean that even full genome comparisons may not correctly identify an individual’s tribal affiliation. 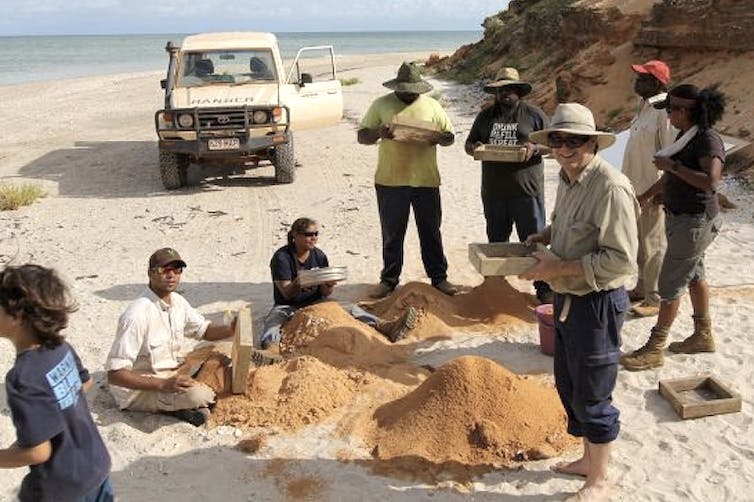 Excavating the remains of a woman buried more than 3000 years ago at Duyfken Point on Cape York revealed no nuclear DNA. Author provided

Another way to get information about where human remains are from is to measure the strontium in their bones and teeth.

Strontium is a common element, and our bodies use it as a building block. There are different types of strontium, called isotopes, and the ratio of these isotopes in the ground varies from place to place. So, if you measure the strontium isotope ratios in some remains and have a map of the different ratios at different places, it can help you work out where the remains came from.

Strontium isotope ratios have been used to guide repatriation elsewhere in the world, but our research in Cape York suggests this approach also won’t solve the problem of repatriating Australian Aboriginal remains by itself. 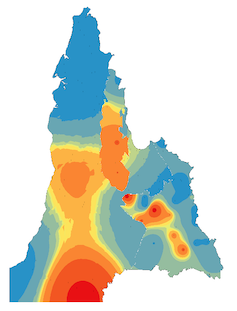 In the course of our Cape York project, we completed the first regional scale analysis of strontium isotope variability in Australia. This involved collecting a large number of water, soil, and plant samples and creating a strontium isotope map or “isoscape”.

We found that locations often did not have unique values. This suggests that strontium ratios can narrow down the range of possible areas to which a set of remains could be returned, but on their own they are unlikely to pinpoint the exact area.

Genomes and isotopes together

Based on the results of our studies with genomes and isotopes, we think a reliable protocol for repatriating Aboriginal remains will take more than one scientific technique. Genomics alone won’t solve the problem. Nor will isotope geochemistry.

Instead, we need to develop an integrated interdisciplinary approach using DNA, isotopes, and whatever other lines of evidence are available (such as detailed analysis of bones, and even linguistics).

In order for this approach to work, we need to avoid creating a hierarchy among the scientific disciplines involved and focus instead on how they complement each other. In addition, we need to devise mechanisms that encourage sustained interaction and knowledge transfer between scientists from different disciplines.

We drew another major conclusion from our Cape York project: those of us involved in repatriation projects should aim higher. We need to put more time and energy into developing new techniques and assessing the accuracy of existing ones.

Equally importantly, we need to seek new ways of fostering collaboration among scientists from different fields and between scientists and Aboriginal communities.

Lastly, the repatriation of Aboriginal remains deserves the same level of rigour as the repatriation of historical military remains and modern missing person cases. Crucially, this means that we should employ the standard of proof for coronial investigations, which is “on the balance of probabilities”.