The antibiotic resistance threat is real. In the years to come, we will no longer be able to treat and cure many infections we once could.

We’ve had no new classes of antibiotics in decades, and the development pipeline is largely dry. Each time we use antibiotics, the bacteria in our bodies become more resistant to the few antibiotics we still have.

The problem seems clear and the solution obvious: to prescribe our precious antibiotics only when absolutely needed. Implementing this nationally is not an easy task. But Australia could take cues from other countries making significant progress in this area, such as Sweden.

Read more: Antibiotic resistant superbugs kill 32 plane-loads of people a week. We can all help fight back

Antibiotic use was rising steadily in Sweden during the 1980s and 1990s, causing an increase in antibiotic resistant bacteria. A group of doctors mobilised to tackle this threat, and brought together peak bodies across pharmaceuticals, infectious diseases and other relevant areas to form a national coalition.

The Swedish Strategic Programme Against Antibiotic Resistance (Strama) was founded in 1995.

Levels of antibiotic use and resistance in Sweden are now among the lowest of all OECD countries, both in humans and animals.

What has Australia done so far – and what more can we do?

In 2017, Australia’s chief medical officer sent a letter to all high-prescribing general practitioners. Over the following six months, this resulted in around a 10% reduction in antibiotic prescriptions among those GPs.

While an excellent start, this is just one of several interventions needed to avert the looming antibiotic crisis.

Read more: Drug resistance: how we keep track of whether antibiotics are being used responsibly

The idea of audit and feedback sees GPs provided with a summary of their antibiotic prescribing rates over a specified period of time.

In Australia, antibiotic prescribing data are currently collected by the Pharmaceutical Benefits Scheme (PBS) and periodically used by the National Prescribing Service (NPS MedicineWise) to provide feedback to some GPs.

This results in some decrease in antibiotic use; a small but desirable effect if combined with other interventions.

The Australian Commission on Safety and Quality in Health Care keeps a list of antibiotics that should only be used as a last line of defence. An example is meropenem, which is commonly used to treat infections with multidrug-resistant organisms such as septicaemia.

Current restrictions stipulate these antibiotics can only be used in hospitals under the supervision of a hospital antimicrobial stewardship team. This team usually consists of an infectious disease specialist, a microbiologist and a pharmacist. The team reviews the request and either approves it or recommends using another antibiotic.

But the way this is enforced differs between Australian hospitals. We may need to strengthen these restrictions if resistance continues to increase. 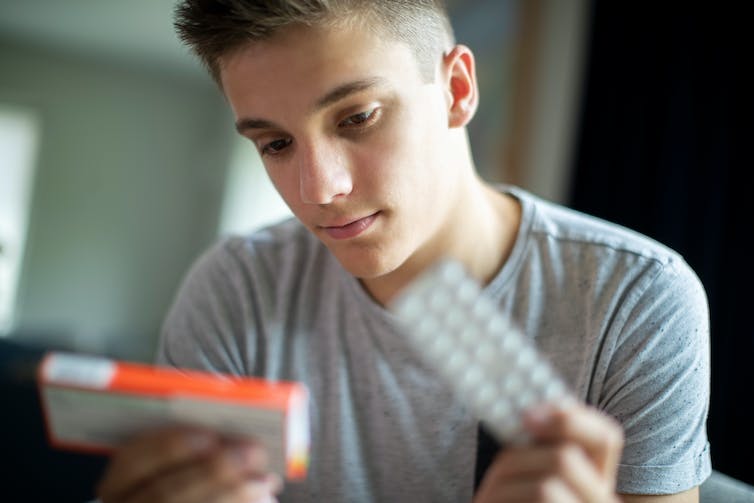 Doctors can educate patients about when antibiotics are and aren’t appropriate. From shutterstock.com

Prescriptions which include a “repeat” could leave patients believing another course of antibiotics is needed, when this is not always the case. They may hold on to the prescription with a “just in case” attitude to take when they feel it’s necessary, or even give the prescription to someone else.

In Sweden, there are no default repeat prescriptions for antibiotics and this is reinforced by appropriate package size.

Read more: Why the health and agriculture sectors need to work together to stop antibiotic resistance

Pleasingly, Australia’s Pharmaceutical Benefits Advisory Committee has recently recommended the removal of default repeat options for a range of common antibiotics in high usage, where no repeats are deemed clinically necessary.

Delayed prescribing is when a GP provides a prescription during the consultation, but advises the patient to see if the symptoms will resolve first before using it (a “wait-and-see” approach).

GPs use delayed prescribing in situations of uncertainty as a safety measure, or when patients appear anxious and require additional assurance antibiotics are accessible in case the infection gets worse.

A systematic review found delayed prescribing resulted in 31% of people taking the course of antibiotics compared to 93% who were prescribed them normally.

To change public attitudes around antibiotic use and preservation, it’s important to communicate the negative effects of the unnecessary use of antibiotics and the risk of antibiotic resistance for the individual as well as the community.

Continuous awareness campaigns are essential (for example, via the media) to keep the public tuned in to the issue. The French campaign “antibiotics are not automatic” is a good example.

Read more: Why GPs prescribe too many antibiotics and why it's time to set targets

Further, enabling patients to be involved in the decision of whether to use antibiotics or not encourages discussion between the doctor and the patient around the benefits and harms of potential treatments. Using shared decision making in consultations has proven effective in reducing antibiotic prescribing by about one-fifth.

Each of these strategies contributes a small amount to improving antibiotic usage. Like the Swedish Strama program, the combination will need to be sustained and reinforced over many years to reach levels of antibiotic use comparable to the lowest prescribing OECD countries, like Sweden.