Australia is famous for its supposedly scary spiders. While the sight of a spider may cause some people to shudder, they are a vital part of nature. Hostile reactions are harming conservation efforts – especially when people kill spiders unnecessarily.

Populations of many invertebrate species, including certain spiders, are highly vulnerable. Some species have become extinct due to habitat loss and degradation.

Read more: Spiders are threatened by climate change – and even the biggest arachnophobes should be worried

In dramatic efforts to avoid or kill a spider, people have reportedly crashed their cars, set a house on fire, and even caused such a commotion that police showed up.

A pathological fear of spiders, known as arachnophobia, is of course, a legitimate condition. But in reality, we have little to fear. Read on to find out why you should love, not loathe, our eight-legged arachnid friends. 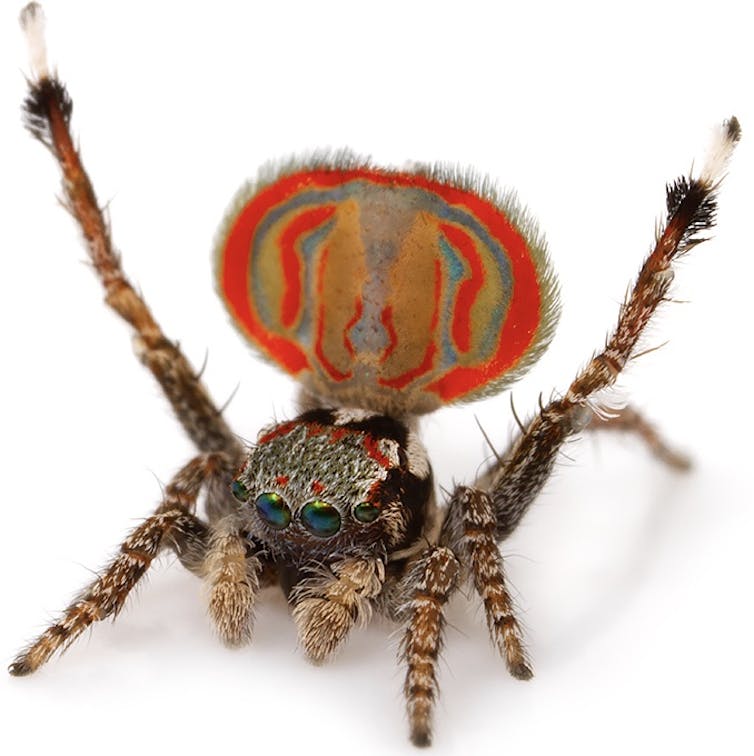 A male peacock spider. Spiders are a vital part of nature. She's Got Legs/Caitlin Henderson

1. Spiders haven’t killed anyone in Australia for 40 years

The last confirmed fatal spider bite in Australia occurred in 1979.

Only a few species have venom that can kill humans: some mouse spiders (Missulena species), Sydney Funnel-webs (Atrax species) and some of their close relatives. Antivenom for redbacks (Latrodectus hasseltii) was introduced in 1956, and for funnel-webs in 1980. However, redback venom is no longer considered life-threatening.

2. Spiders save us from the world’s deadliest animal

Spiders mostly eat insects, which helps control their populations. Their webs – especially big, intricate ones like our orb weavers’ – are particularly adept at catching small flying insects such as mosquitos. Worldwide, mosquito-borne viruses kill more humans than any other animal.

3. They can live to an impressive age

Spider silk is the strongest, most flexible natural biomaterial known to man. It has historically been used to make bandages, and UK researchers have worked out how to load silk bandages with antibiotics. Webs of the golden orb spider, common throughout Australia, are strong enough to catch bats and birds, and a cloak was once woven entirely from their silk. 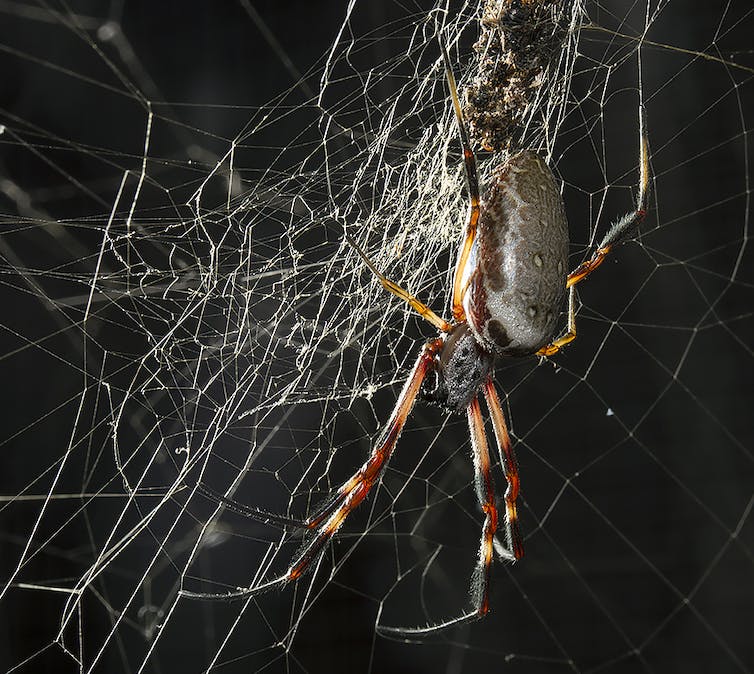 5. Their venom could save our life

The University of Queensland is using spider venom to develop non-addictive pain-killers. The venom rapidly immobilises prey by targeting its nervous system – an ability that can act as a painkiller in humans.

Read more: Curious Kids: why do spiders need so many eyes but we only need two?

The venom from a Fraser Island funnel web contains a molecule that delays the effects of stroke on the brain. Researchers are investigating whether it could be administered by paramedics to protect a stroke victim on the way to hospital.

Funnel-web venom is also being used to create targeted pesticides which are harmless to birds and mammals.

6. They could compete at Little Athletics

The Australian huntsman (Family Sparassidae) can run 40 body lengths per second, about eight times faster than the fastest human runners.

Other spiders have great throwing skills. To catch moths, the bolas spider spins a thread with a sticky glob of silk on the end. The glob mimics the scent of a female moth. When a male moth comes to investigate, the spider throws the glob at the moth, catches it then reels it in.

7. Spiders want to be left alone

Spiders are not aggressive and will either try to run away from people, or defend themselves. Many are exceptional at hiding or camouflaging themselves, in the hope we don’t even see them.

Wrap-around spiders (Dolophones species) flatten themselves around branches to hide during the day, then come out to build webs at night. 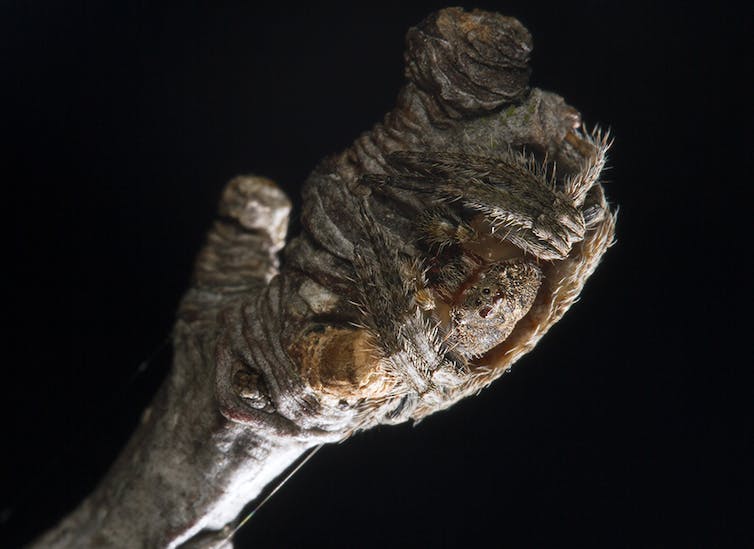 A wrap-around spider (Dolophones species) is a master of camouflage. Caitlin Henderson/She's Got Legs

Trapdoor spiders live in burrows with a silken lid that shuts tight, then gets covered in dirt or leaf litter. 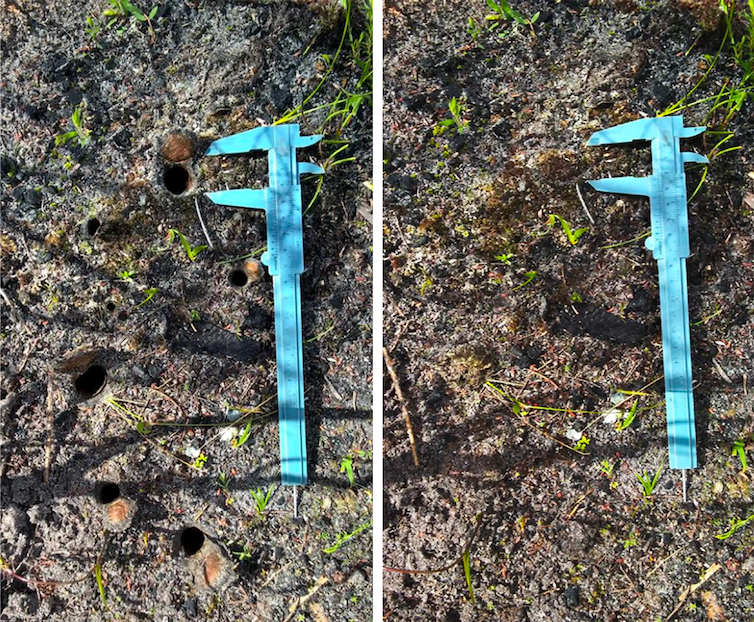 It’s well known that some female spiders eat their partners during or after sex. But male Tasmanian cave spiders have evolved to avoid this fate. They use kinks in their legs to pin the female’s fangs apart while they mate, which can prevent her from killing him. These spiders are so fascinating, they are the subject of a documentary, Sixteen Legs

During courtship, Australian male peacock spiders display their colourful abdomen to the female by using some pretty impressive dance moves.

Some female spiders produce milk for their young, or even sacrifice themselves as food. All spider mothers protect their babies, called spiderlings. However trapdoor spider mothers allow spiderlings to live in the home burrow for nine months, before they dig their own burrows nearby. 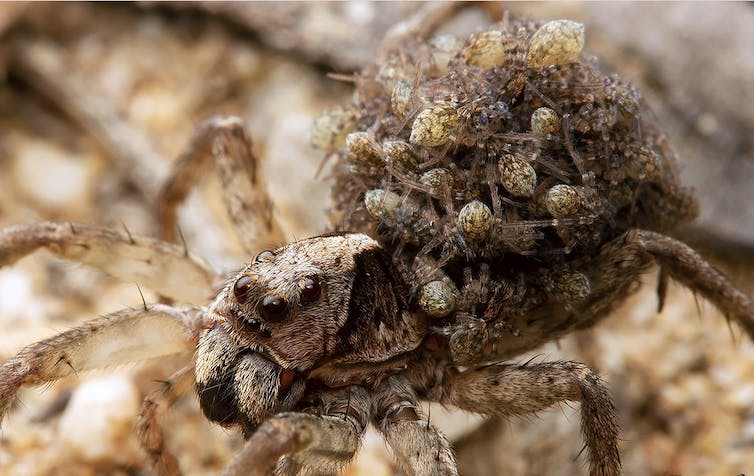 A wolf spider carrying her spiderlings. She's Got Legs/Caitlin Henderson

It is important to remember that spiders and other invertebrates – animals without spines – make up 98% of animal species. They are vital to the functioning of ecosystems; without them, the remaining 2% of vertebrates, including humans, could not survive.

OK, OK. I care about spiders. Now what?

Spread the word to your friends and family that spiders should be cared for.

By all means, teach children that certain spiders require caution, and should be admired from a safe distance. But if your child has an irrational fear of spiders, address this as early as possible. Encourage positive interest in the spider world by exposing children to books and movies with spiders as the lead protagonists, such as Charlotte’s Web and Spiderman.

Research has shown that adults can overcome fear of spiders through frequent exposure. So be sure to share images of spiders with your arachnaphobic friends!

Caitlin Henderson contributed to this article.

Read more: Curious Kids: What are spider webs made from and how strong are they?