This is the first question Prime Minister Scott Morrison should have asked himself when US President Donald Trump invited him to join an expanded G7 gathering at Camp David in September.

The invitation came directly to Morrison in a phone call from Trump on June 2.

This was a week after the death of George Floyd in Minneapolis. In that week, American misgivings about the direction in which their country was heading crystallised in Black Lives Matter demonstrations across the United States. They are still going.

Not since the civil rights movement and the death of Martin Luther King in the 1960s has the United States witnessed such widespread civil unrest. This is a country divided against itself, with a president who seems unwilling or unable to find the words or actions to address his country’s divisions.

This forms the background to an invitation to Morrison to attend an event that, on the face of it, is not designed to rally Western democracies dealing with the economic fallout from the coronavirus pandemic.

Rather, a G7+ gathering would be aimed at providing an embattled president with a photo opportunity in the middle of what promises to be one of the most bitter presidential election contests in American history.

In other words, Morrison would be a prop in a wider political game.

Trump has also made no secret of his plans to turn an expanded G7 into a vehicle to criticise China as part of a re-election strategy that involves demonising Beijing. 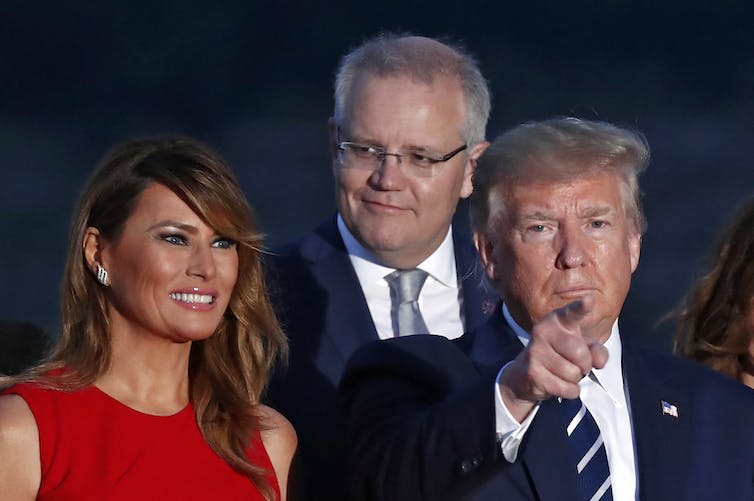 There are many reasons to criticise China, but a Camp David pile-on is the last thing Morrison needs to associate himself with given the tenuous state of Sino-Australian relations.

Read more: Beware the 'cauldron of paranoia' as China and the US slide towards a new kind of cold war

There are several risks associated with a Trump-proposed G7+:

Latest polls show a slump in Trump’s popularity in response to widespread disgust at his responses to nationwide civil rights demonstrations.

Morrison would be wise to pay attention to criticisms voiced by a clutch of respected American retired generals. These include James Mattis, who resigned as defence secretary after Trump capriciously abandoned Kurdish allies in northern Syria.

The background to a Trump-convened G7+ summit

Trump has indicated he wants Russian leader Vladimir Putin present. G7 founder members, including Canada and the United Kingdom, are opposed to Putin’s presence, given Russia’s exclusion from the then G8 after its annexation of Crimea from Ukraine in 2014.

It should also go without saying that a Russian presence at Camp David would be highly provocative domestically in America on the eve of an election, given sensitivities over alleged Russian interference in the 2016 poll.

All things being equal, there would be legitimate arguments for convening an expanded G7 during a global economic meltdown in the wake of a pandemic.

Such a gathering might also consider shifts in a global power balance occasioned by China’s rise. This is a pressing issue.

However, things are far from equal. Risks outweigh potential rewards.

Given the anti-China bombast emanating from Washington, it would be hard to envisage Camp David arriving at a constructive approach removed from Trump’s crude politicking.

Typical of the sort of rhetoric Trump has indulged in recently is an outburst on May 29 in which he said China had “ripped off” the United States, “raiding our factories” and “gutting” American industry.

Crude attempts by America to promote a G7+ front against China would be particularly awkward for participants like South Korea and Japan.

South Korea is geographically vulnerable to Chinese pressure, given the unstable security environment in which it finds itself on the Korean Peninsula. South Korea’s companies are significant investors in China. Trade between the two countries is strongly in Seoul’s favor.

Japan under Shinzo Abe has been seeking to improve relations with Beijing. Abe would not want those diplomatic efforts to unravel at a Trump-inspired Camp David three-ring circus in which China feels ganged up on.

China’s Xi Jinping had been scheduled to visit Japan this year as part of a warming process. That important mission now looks as if it will be postponed.

Like South Korea and Japan, Australia risks giving unnecessary and additional offence to China, to its detriment.

Morrison has already been the recipient of a lesson in Chinese realpolitik in which Australia was made vulnerable by taking the lead in efforts to hold China to account for the coronavirus.

The prime minister’s decision to spearhead efforts to convene an independent inquiry into China’s culpability produced a ferocious push-back from Beijing.

Morrison’s wiser course would have been to join like-minded countries in efforts to get to the bottom of the origins of the virus. This would include the respective roles of the World Health Organisation and China itself.

Instead, he blundered into a thicket of international diplomacy. This has drawn reprisals from Beijing in the form of restrictions on imports of Australian commodities accompanied by inflammatory rhetoric directed at Canberra.

Participation in a Camp David pile-on – if that were to happen – would further inflame this rhetoric and might well lead to additional economic reprisals.

An interesting historical footnote to Trump’s invitation to Australia to attend a G7+ is that Australia diplomacy has, in the past, sought membership of the global grouping of like-minded Western democracies.

This was a pet project of former prime minister Malcolm Fraser. He was frustrated, as it turned out, by American opposition on grounds that opening the doors would encourage lobbying by others to be included.

To be clear, Australia is not being asked on this occasion to join the G7. Along with Japan, South Korea and India, it is being invited to participate.

This is a similar situation to last year when France’s Emmanuel Macron, in his role as convener, invited Morrison to attend the Paris G7.

It is also uncertain whether the Camp David event will go ahead at all, given uncertainties that prevail in the world on many different fronts. Will Trump be in a position to convene such a gathering if America remains in turmoil?

Finally, there’s the issue of where an expanded G7 leaves bodies like the G20 and the Asia-Pacific Economic Cooperation (APEC) forum.

In these latest circumstances, in which the world is facing economic and other challenges not witnessed in a generation, it would make sense to convene a G20 – as was done in 2008 to combat the Global Financial Crisis – whose membership includes both China and Russia.

In the end, what’s in it for Australia? Diplomatic risks are emphatically to the downside.