Trump Baby is President Donald Trump’s highest-profile troll. During his recent UK visit, the airborne infant protested alongside tens of thousands of marchers against current US policies. While Trump’s itinerary was carefully choreographed to avoid protesters, his nappy-clad inflatable caricature was embraced by crowds on the streets and watching from afar. Now there is speculation that the baby blimp will come to Australia for Trump’s expected visit here later this year.

Trump Baby critiques the president not from a political or moral standpoint, but at the level of ego. It is designed to embarrass and humiliate him. Baby’s makers believe such an insult has a better chance of hitting its target than political arguments, which Trump is seemingly impervious to. Indeed Trump complained that the balloon made him feel “unwelcome”. Bullseye!

Trump Baby quickly went viral, demonstrating that while art cannot necessarily change the world, it can harness to great effect the zeitgeist of cultural sentiment. Yet in these times of political uncertainty, creative people need to step up to the challenge of not simply mirroring the issues and concerns of the day, but of providing new ways of thinking about the world and its problems. This opportunity was largely missed with the Trump blimp.

While grotesque, giant inflatables have a place in social protest – the trade union movement has deployed them to great effect – there is an opportunity here to elevate creative responses beyond the well-trodden path of cheap shot street theatre.

The long history of visual protest 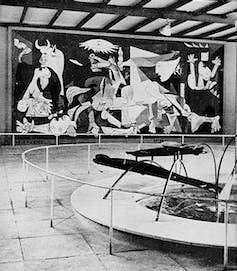 Social change and uprisings have been marked by image-led protests throughout history. Picasso’s Guernica (1937) was made in response to the suffering and violence inflicted by the Spanish civil war, and 80 years later remains a universal symbol of anti-war protest.

Artists responded with murals and multiple-edition prints to the 1968 uprisings in Europe, the beginning of the end of the Soviet empire in 1989, and as part of the global Occupy movement from 2011 onward. In the last two years, the preponderance of Trump protest art has almost become a genre of its own.

Read more: May 1968: the posters that inspired a movement 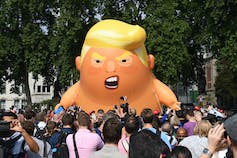 The process of staging any interventionist art project is fraught with obstacles. These range from prohibitive public safety regulations and sceptical bureaucrats to cost blowouts and unpredictable weather. Yet in Britain last month the protest gods (and indeed, Mayor Sadiq Khan) were on the side of Trump Baby, eagerly rolling out the red carpet in a spirit of geniality that was not extended by the public to Trump the man.

In the Don’s home country, the state has assumed a more cautious, sometimes censorial approach. Last year, a proposal for another balloon artwork opposing Trump was scuttled by Chicago authorities. The plan was to fly four, nine-metre wide, pig-shaped helium balloons from a section of the Chicago River that fronts Trump Tower. The bloated, golden swine would obscure the giant letters that spell out the proprietor’s name.

Designed to protest falsehoods in the current political environment, the project invoked a range of cultural references. The pigs referred variously to the four central pig characters of George Orwell’s Animal Farm, Trump’s controversial “Miss Piggy” comments about a former Miss Universe, and the garish gold interiors of the Trump penthouse. In a blow to the creators, Chicago authorities blamed the potential for river traffic congestion in ruling that, for now, the pigs can’t fly. 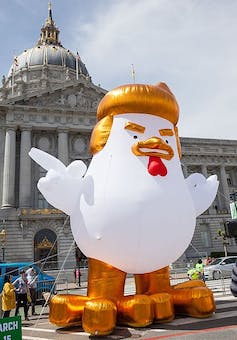 Don the Chicken makes an appearance at the Tax March in San Francisco in 2017. Pax Ahimsa Gethen/Wikimedia Commons, CC BY-SA

Trump Baby, like much Trump protest art, provides some much needed levity in the depressing news cycle of world politics. It was preceded in 2017 by Don the Chicken, an inflatable fowl that temporarily landed on the lawn behind the White House. Don’s grotesque features also mocked Trump’s inflated ego and narcissistic preoccupation with appearance.

The motivation behind these inflatables and other Trump protest art is mostly uniform and blatantly obvious. The UK designers of Baby Trump have stated on numerous occasions that the current US administration is not representative of the kind of politics that people in the UK believe in. The creators behind the Chicago proposal have similarly explained that they are not activists. Instead they are proud Americans creating visual commentary on the current political environment.

Speaking to the converted

The visual aspect of the commentary is key to the concept of Trump Baby, Don the Chicken and the (currently grounded) flying pigs. Historically, visual imagery in the public sphere was mainly found in places of worship. Renaissance scholar Leon Battista Alberti wrote in the 15th century that images were essential to help people understand the message being conveyed.

Inside the churches and cathedrals of Europe, artists’ murals, paintings and sculptures reinforced the word spoken from the pulpit. Like Baby Trump, in its day religious imagery was speaking to the converted. However unlike art of the Renaissance, the baby blimp eschews the possibility of subtle inference and nuanced interpretation in favour of delivering a bland message designed for mass appeal.

This is the crucial difference between art and caricature: Baby Trump is a towering gasbag that sucks up all the intellectual oxygen in the room. 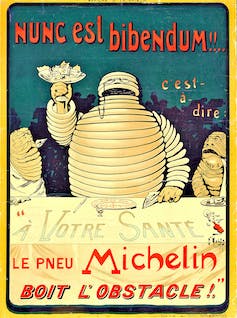 Religious art of the Renaissance was also commissioned as eye candy with an essentially didactic purpose. However, that imagery is imbued with a narrative-based layering that continues to command interest and acclaim from historians and tourists of all faiths 500 years later. The baby blimp, in contrast, is the brainchild of graphic designers who excel in creating witty one-liners.

This is not to say that serious art cannot play a role in protest movements. However, because inflatables have been commandeered by advertising since the 19th century birth of the Michelin Man, artist-led balloon projects need to disassociate themselves from the visual vocabulary of the marketing industry.

Australian artists have proven this is possible: in Brook Andrew’s Jumping Castle War Memorial created for the 2010 Biennale of Sydney and Patricia Piccinini’s Skywhale commissioned for the 2013 centenary of Canberra, each artist drew on their own unique repositories of image and form to present unexpected and engagingly complex juxtapositions of politics, history and fun.

Brook Andrew discusses his Jumping Castle War Memorial, displayed on the forecourt on Cockatoo Island during the 17th Biennale of Sydney. The Castle acted as a memorial for forgotten peoples who have been the victims of genocide internationally.

The crude rendering of Trump Baby, in contrast, reflects its simplistic concept: Trump is like a baby – immature, noisy and self-centred. In an image-driven 21st century threatened by divisive politics, this blimp exemplifies the brash and infantile folly that it purports to critique.

If Trump’s troll travels here later this year, it throws open a challenge for Australian artists to greet the man and his Baby with thoughtful, artistically sophisticated responses that provoke considered debate rather than superficially regurgitating popular opinion.